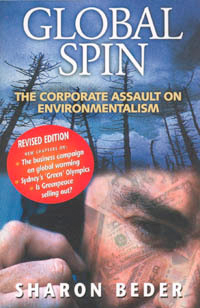 John Pilger
"Global Spin is outstanding. Sharon Beder has taken the taboo subjects of propaganda and censorship in free societies and exposed their insidious threat. This is such an important book that I would put it on every school curriculum"

David Edwards
"Shows the way for environmentalists to move from a position of political naivety and relative impotence to a new radical depth of understanding where corporate propaganda can be effectively countered. . . The most important contribution to the environmental debate that I have read."

Included in "50 books to change your world", The Ecologist, September 2002.

Global Spin reveals the sophisticated techniques being used around the world by powerful conservative forces to try to change the way the public and politicians think about the environment. Large corporations are using their influence to reshape public opinion, to weaken gains made by environmentalists, and to turn politicians against increased environmental regulation.

The corporations' techniques include employing specialized PR firms to set up front groups that promote the corporate agenda whilst posing as public-interest groups; creating 'astroturf' - artificially created grassroots support for corporate causes; deterring public involvement by imposing SLAPPS-strategic lawsuits against public participation; getting corporate-based 'environmental educational' materials into schools; and funding conservative think-tanks, which have persistently tried to cast doubt on the existence of environmental problems and to oppose stricter environmental regulations.

In the media, corporate advertising and sponsorship are influencing news content, and industry-funded scientists are often treated as independent experts. In the shops, 'green marketing' is being used to reassure consumers that corporations are addressing serious environmental problems.

Global Spin shows how, in a relentless assault on democracy and its institutions, the massive, covert power of large corporations has enabled corporate agendas to dominate the international debate about the state of the environment and the most effective means of solving environmental problems.